12 Pups and Tears For A Good Dog 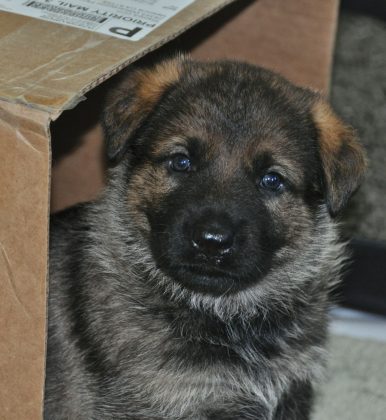 When the phone rang that morning a while back, twelve puppies lay sleeping in contented piles at my feet. Snuggled against their littermates, amidst the colorful toys and obstacles, just four weeks old, each pup sleeps wearing their first collar while I watch over them. As I had carefully fitted these collars, I was well aware that this was more than a necessary step in their understanding of what the world will expect of them. It was also what my friend Ginny Palmieri calls the “covenant of the collar”, a symbol of my promise to them that I will do all I can as their breeder to set them into the world ready and able to deal with what comes their way.

Into the quiet sighs and contented groans of sleeping pups, the phone rang. It was Jeannie, a woman who 14 years ago had bought a puppy from me – a wonderful puppy named Jersey. Over the years, I’ve shared the stories of Jersey’s puppyhood, adolescence, young adulthood, the move to Hawaii and the quarantine, and the move back to PA, and then back to VT where it had all started. I helped save Jersey from an inaccurate diagnosis of degenerative myelopathy and set her and her family on the right course to having a torn cruciate repaired at age 11 plus. Jersey bounced back and went on to enjoy life pain free. It had been upsetting to see how quickly vets assumed DM and pretty much gave up on an 11 year old dog in fine shape just because she was a German Shepherd. Heartening to see how well she did once given the right treatment.

Just a few weeks before, Jeannie had called to note that it was Jersey’s 14th birthday, and she left a message noting with pleasure that her beloved dog had made that important milestone. And now, this morning, Jersey was dead, going on her own terms, in her own way, without much warning. Jeannie and I cried together, both of us knowing that with the close of Jersey’s life, huge chapters in our lives were also closed.

As I let the tears come, my gaze fell upon the puppies around me. With a pang, I wondered who I would be and where I would be and how would it be when I got the call or the letter or the email from their families telling me this same news. How long would it be for each of them? I have been extraordinarily lucky as a breeder, and the overwhelming majority of the puppies I’ve bred lived long lives, so early deaths, tragic deaths, rock me hard. It is as if somehow, there’s been a violation of an unspoken but deeply held belief that the dogs I breed will live long and well. And yet… even the deaths of dogs who have lived long, rich lives makes my heart ache. Sometimes it feels as it the tears are rarely far away.

Twelve puppies at my feet. Twelve bundles of joy and delight and pleasure in their very beings. Twelve little souls who have honored me by making me the first stop on their life’s journey, by allowing my hands and my heart to be the first to touch them. It is an honor I do not take lightly. And I readily embrace it all, even knowing full well that unless I run out of time sooner than odds might say I will, these fresh lives will someday translate in their own unique way into twelve moments of grief.

Grief being the weight of love, I do my best to honor that weight when it falls on my heart. There is little I can do except to share the grief with those who loved the dog. My gratitude for what each dog has brought into this world is evidenced by just this small thing I have to give: my willingness to be vulnerable, open, unabashed when the time comes to shed tears for a good dog.

Jeannie asked how could I do this with not only my own animals (and so many of them) but also with each and every puppy that I bred. A good question… In the end, it is the fullness of the circle that draws me to it, the seamless flow of life and death. Above all, the mystery of a soul’s purpose holds me in thrall. As each pup arrives in this world, as their mother lays trusting me as I hold her baby in my hands, I see a new life, and more. I see the possibilities that lay within each puppy to move some small part of the world in ways I cannot foresee but nonetheless trust and respect as their soul’s work.

These pups who start their journey here with me have gone on to shape lives and hearts and minds and even to literally change the world in ways unguessed as they nuzzled hungrily for their first meal. For example, in Vermont, there is a group that has done so much for so many — Therapy Dogs of VT. Founded in 1990 by Steve Reiman and his two Hawks Hunt German Shepherds, Lily and Jordan, TD of VT now has more than 200 members and serves many facilities from hospitals to nursing & retirement homes, correctional facilities, crisis and community programs. Though Lily and Jordan (Jersey’s aunt) have been gone for a while, what they helped Steve set in motion remains a powerful force for good. Therapy Dogs of VT is now statewide.

And so it goes on, the joy, the tears, and ultimately, a world that is never quite the same because one soul touches another. Where these twelve puppies go and what work they do remains to be seen. For Jersey, the tears will fall around the world, as she had many friends and touched many lives. And the ripple moves on even after she has surrendered a body that served her long and well. It is truly an honor to be a part of this process.