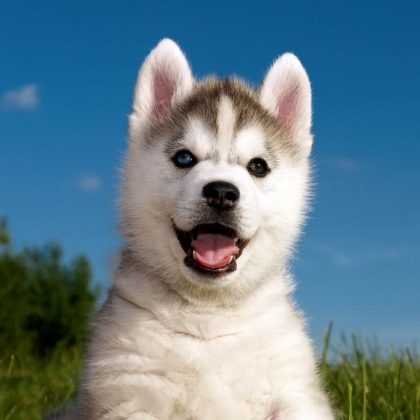 “All dogs start out as perfectly normal puppies,ready and eager to learn, as malleable as clay.” (Dr. Ian Dunbar)

Sigh . . . this came across my desk today, as the tagline for the Dog Star Daily Woof from Dr. Dunbar and staff. As a breeder working on her 11th generation of German Shepherds, it made me roll my eyes, as it is a typical statement from non-breeders who seem to have a very skewed and unrealistic view about puppies and what they are or are not. But then I had a stronger reaction, as a trainer. The more I thought about it, the stronger my response.

“Perfectly normal”? Coming as it does from a veterinarian who is also a PhD in behavior, I’d hope that Dr. Dunbar’s pronouncements would reflect an awareness that there are so many ways in which puppies can start out far less than normal. Even setting aside his considerable education and experience with dogs, it might be fair to assume he’s seen or at least heard about? read about? a range of human babies, some of which are born far less than “perfectly normal.” (For example, hard to escape the sad statistics regarding autism these days, but perhaps he has.) It is hardly rocket surgery, this notion that even in the best of situations, Nature never produces 100% viable or normal beings. Whether sponge or spaniel, genetic or developmental aberrations can and do routinely occur, affecting mental, emotional and physical aspects of animals.

What most bothers me as a trainer is that his underlying premise puts total responsibility on the owner. The unspoken message is that since the pup was born “perfectly normal” if you just train enough and in the proper way using approved methodology, you will not wreck this “perfectly normal” puppy and he can grow into a “perfectly normal” dog. In essence, it’s all yours to lose. If it goes wrong, the fault lies squarely with the owner for failing to train enough or properly or soon enough or long enough or using the right techniques or . . . you get the idea.

To say this is an unfair and unrealistic message is an understatement.

Though Dr. Dunbar’s been at it longer than I have, we both are trainers who have worked with Joe Q Public and JQP’s dogs for a long time. Apparently, our experiences differ. Because as both a breeder and a trainer, I’ve seen dogs who were not perfectly normal from the get go. I’ve worked with countless owners who diligently did their best for their dogs, followed all advice given to them, and still had an abnormal dog. And it is so difficult to describe the scope of their guilt and shame at somehow failing the dog they loved very much. A dog that perhaps had to be euthanized because no amount of training could bring the dog even vaguely close enough to normal to be safe, or able to live with something resembling good quality of life.

Dr. Dunbar’s comment regarding “perfectly normal” has the same unspoken blame that is contained in the idea that people get sick because of “sin” or that they don’t heal because they lack “sufficient faith” or aren’t “positive enough.” It may be worth remembering that not so long ago, mothers of autistic children were actually blamed for the autism, which was believed to result from the mother’s “emotional coldness.” I doubt Dr. Dunbar intends this undertone of blame, but I also have to wonder if he’s really considered what is unspoken beneath this sound bite. Like many sound bites which make a nifty quote, his tagline implies a great deal which simply isn’t true. As sound bites do, it neatly truncates a complex truth into something simple and easily swallowed without needing any mental mastication or even digestion. And we all live happily ever after.

Sad news flash: Some dogs are not born “perfectly normal.” A few times in a long career as a breeder, I’ve had to euthanize puppies who were clearly not normal. This is always a heartbreaking choice, made only after wishing and hoping and praying in the face of the inescapable reality: this puppy is not normal, cannot live a normal life, will suffer needlessly or will live a short life filled with illness and pain. The majority of these pups were physically malformed (cleft palate, persistent aortic arch, incomplete development resulting in non-existent structures).

But one was wrong from a neurological/behavioral response perspective. Pick her up, and at times, she cuddled into your hands. Other times, she would stiffen and scream, impossible to console or comfort, no relaxation possible until after she was put down and left alone for a prolonged period (10 or more minutes). No amount of careful massage or touch work or contact changed this response in any way. This began around 3 weeks of age, though she had seemed unusual in her responses prior to that as well. For several weeks, we kept hoping against hope that her rapidly changing body would develop through and out of whatever was behind this abnormal response, but by 7 weeks of age, it was terribly apparent this puppy was not going to “get better” and that it would be irresponsible to place or sell her into any home. With great sorrow, after caring for her with diligence from the moment she took her first breath, we euthanized her.

30 years later, I still remember this puppy, always will. Long experience has taught me that it was very much the right decision. In the intervening years since her death, I have worked with far too many loving dog owners who have had their heart broken by a puppy they bought with joy and hope. They had the very reasonable expectation that love, appropriate training, good husbandry and proper socialization would help create a healthy, happy canine companion. And then reality hit. Their bundle of joy was also a bundle of abnormal responses, some of which could be modified or managed but not necessarily trained to normalcy, never mind perfectly normal. (And this is just the folks who bought a puppy, the theoretically “perfectly normal” puppy Dr. Dunbar refers to. Another whole story can be told of the people who acquired older dogs.)

Dr. Dunbar has spent most of his career working hard to promote happy relationships between people and dogs, effective and fun training, and humane methodologies. He has been one of my great mentors, and I am forever grateful to him for what he’s done for dogs. However, there are times when his simple messages become simplistic, and in doing that, he rob dogs and people alike of important nuances and distinctions. His message might be better served by a more realistic message which acknowledges that training is just one part of the picture. Dog owners can use training wisely to help dogs become their best possible selves, even if that best self is one with limitations or less than “perfectly normal” responses. Holding the image that all dogs were born “perfectly normal” is unfair to the dogs themselves and to the people who love them.