Drive and brakes and steering

Home / Articles in English / Drive and brakes and steering 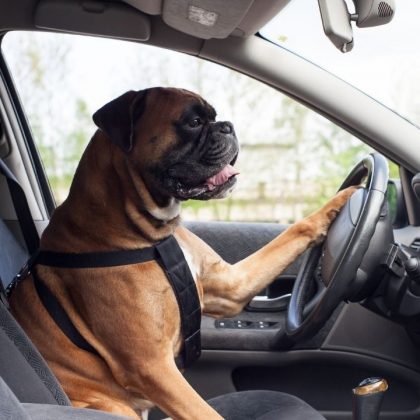 A recent discussion on a trainers’ list brought several comments regarding the “drive” in “working lines” leading to puppies and young dogs leaping, jumping, biting and gripping hard. It was particularly worrisome to several list members that some trainers and breeders considered this behavior “normal” and part and parcel of the set of behaviors that are seen in “working” lines. It seemed to me that there were some important points missed by both sides.

To be sure, whenever the behavior of biting is involved, people tend to get worried. And for good reason. Add “gripping” and words like “full bite” and people get even more concerned. Those pearly whites alarm folks. Our understanding of aggression is sometimes simplistic at best, and some believe that if teeth are shown or used, aggression is part of the picture. The truth is far from that simple! In reality, biting or gripping is just a behavior, part of the dog’s natural behaviors, and behaviors that can be used with tremendous power or astounding nuance and delicacy. If you’ve ever been nibbled groomed or bitten hard, watched a dog rip a sturdy toy to shreds or play tug with a young pup and let the puppy win, then you’ve seen some of the range of these behaviors.

For those who find the whole notion of biting and gripping worrisome, perhaps it is easiest to think about it this way: substitute “bite” or “grip” with retrieve, herd, chase. All of these behaviors are aspects of the predatory sequence. In his books DOGS, Ray Coppinger does a wonderful job of explaining the predatory behavior chain – I often recommend his book solely for that chapter.

In our dogs, the behaviors we see are the same ones that would be seen in a wolf’s predatory sequence . These behaviors are instinctive, a natural part of the canine behavioral repertoire. Perhaps most importantly, when expressed by our domestic dogs, these behaviors can show considerable deviation from the natural behavior.

Specialized breeds reflect the results of selective breeding for specific behaviors or exaggerations of some behaviors or inhibition of other behaviors.Thus herding dogs exhibit strong chase behaviors but with inhibited bite/grip and highly inhibited killing behaviors, The Border Collie’s famous “eye” is a result of generations of breeding for an exaggeration of a natural behavior. Bird dogs have the bite/grip intensely inhibited, thus the desired “soft mouth.” In the case of pointing breeds, the naturally occurring stalk behavior is exaggerated to become a frozen “point”.

The bite/grip/grab behavior is strong in many working lines, and there is a genetic component to how the dogs grip, where they grip, what will trigger a bite or grip. For example, some dogs bite low while others come up higher — this becomes very clear when you see dogs worked on sheep or cattle. Are they moving the animals by nipping towards their heels (thus the term “heelers”)? or grabbing a hindquarter or going higher for the shoulder/neck or higher still for nose (“headers”)?

For many working lines (police K9, Schutzhund, ring sport, etc), there is a tendency to bite hard and to grip with a full mouth bite that goes right to the molars. This is prized, and for good reason: in an attack situation, you want the dog bringing his entire jaw power to bear, not merely the incisors and canines (sometimes called a “bitchy” bite, a grip that is more easily dislodged). These full, hard bites are evident from an early age in puppies from these lines, just as birdy pups demonstrate a keen interest in things with feathers, and field bred retriever puppies carry things, and herding puppies respond to moving things with delight.

Selective breeding is a way of engineering a bigger engine for that behavior (or set of behaviors), so that we can easily shape those behaviors into what we want, whether that’s a retrieve of a duck or sheep neatly penned. But balance is the key in any working performance. If you think of instinctive behavior as the engine that drives the dog, then the balance comes in the form of the brakes and steering and multiple gears that allow that engine to be effectively utilized to good purpose. Just as it would not be okay to let a herding dog chase sheep willy-nilly or treat a toddler like an errant ewe, it’s also necessary to teach a strong biting dog what is and is not appropriate for those jaws.

But there is a catch. It gets more difficult to train a dog who is not balanced, who lacks good brakes and steering. Many handlers and breeders who talk about “working” lines are big on having a powerful engine (often referred to as “drive”). Unfortunately, some of these same handlers and breeders miss the important part about brakes and steering.

What I’ve often seen as a result of drive without brakes and steering:

What is unfortunate is that these trainers seem to miss is that the animals with these big engines sometimes succeed in spite of having poor brakes or steering, not because of these unwanted qualities. Consequently, they see a top winning dog and want one “just like that dog!” without understanding that much of what they see may actually get in the way of training and performance, not contribute to success. These trainers mistake out of control, non-productive, dysfunctional arousal for talent/drive.

More than 25 years ago, I trained a Thoroughbred colt in preparation for his sale as a yearling. I took Billdear for socialization walks, taught him to be groomed and handled and to ride in trailers, taught him to stand politely and move on a loose lead. In short, I gave him a lot of skills for a young horse, and he was calm, sensible and steady. To her dismay, the breeder barely made her stud fee on the sale of this colt. He was so well behaved, no one believed he had any drive to be a racehorse.They paid more for highly aroused colts who leaped around wild eyed and snorting, passing up the well behaved colt. As if being able to stand quietly indicated an inability to run fast! Billdear had no shortage of drive – in fact, he went on to be a reasonably good racehorse with 39 starts, 14 firsts, 11 seconds and 5 third places.

The same mistake has been echoed in some of my Hawks Hunt GSDs, most humorously with Hawks Hunt’s Raven Lunatic,CGC, HIC, RN, CL3, CSL4-H, CSL4-F, TN-N, O-NAC, O-NCC, OJC, TG-N, SR, SS, SSA, AD, MX, MXJ, NAP, NJP, PS3, PJ3, PG3, PD3, AKD-Bronze, USDAA Performance Top Ten 2006. Her alphabet soup of titles tells the tale: the dog can work. Raven owns Tammi Potts who decided it would be fun to have Raven herding instinct tested at the GSD National in 2009. A well seasoned competitor, Raven lay quietly while Tammi explained to the testers that this was an intense dog. In fact, she told them a couple of times. The testers assured her that they had a lot of experience, not to worry, and to just go ahead and turn Raven loose with the sheep. Despite her misgivings, Tammi did as they directed, which included doing nothing but letting them handle it all.

My favorite photo of that moment shows Tammi with a “well, I warned you!” look on her face, and just the tip of Raven’s tail visible as she rocketed out to the sheep. Once the testers finally got control of the situation, and were done turning the air blue and huffing and puffing as they put a long line on Raven, Tammmi noted, “I told you this was an intense dog.”

The response? “But she was laying there so quietly…” Another common mistake, thinking that intensity is the same as out of control, non-productive arousal. It’s not. (The testers did have a short learning curve. The next handler, Tom, only had to announce that his big quiet dog Orion was Raven’s brother, and the testers automatically began with a long line!)

What needs to be remembered is that strong herding lines herd, retrieving lines retrieve, hunting dogs hunt, sledding dogs run, guarding dogs guard, etc. Instinctive behaviors that are strongly selected for will be expressed strongly. Whatever behaviors your dog exhibits strongly, the basics remain the same. Instinctive behavior must be appropriately channeled and put under direction and control.

Without the steering and brakes conferred by self modulation and good training, having a big engine of strongly expressed behaviors is pretty much useless. When handlers excuse unacceptable behaviors as just being part of “drive” they do the dogs a disservice, and also reveal the limits of their understanding of arousal, training and balance. When breeders misunderstand drive and balance, they perpetuate the problem.

The next time you find yourself impressed by “drive!” in a dog, stop and take a closer look. Look for the brakes and steering that make that big engine useful and controllable. That’s the really impressive combination that no one needs to fear.