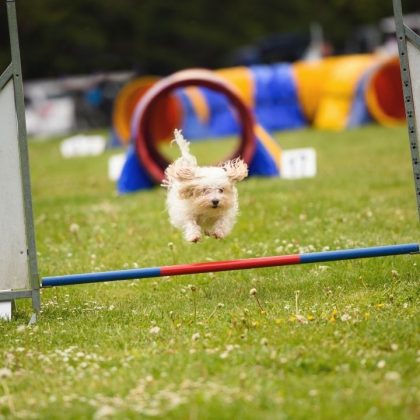 NOTE: This article is the fourth in a 4 part series on jumping that first appeared in Off Lead magazine.

Let’s assume that your dog is physically prepared for jumping – structurally sound and fully functional. He’s mentally prepared – he’s relaxed, confident, with a world of systematic training under his collar; he knows how to jump almost anything you can throw at him. End of jumping problems, right? Hardly. To think that physical and mental preparation is enough is like saying that because your car is mechanically sound and you’re a good driver, there’s nothing to worry about. When you hit a patch of ice, you suddenly remember that there’s one other ingredient at work – the proper conditions. There’s a good reason land speed records are set out on the salt flats and not in the bayous of Louisiana: the conditions are right.

Jumping conditions are the classic Goldilocks situation: like Baby Bear’s chair, porridge and bed, things need to be just right. Unfortunately for our dogs, the conditions are often anything but just right. This is particularly true in competition settings where we have no control over (or often even prior knowledge of) the conditions under which our dogs will be asked to jump. In our training sessions, we can work to offer our dogs the best possible conditions for jumping safely and well. Just right conditions for jumping are a blend of footing, lighting, environment and the distances between the jumps.

The quality of footing – soft or hard, yielding or resistant – is an extremely important consideration. The dog’s body will pay a heavy toll indeed for footing that is not supportive of jumping mechanics. It takes little imagination to understand that jumping on a hard surface can be harmful. Anyone has spent a day simply standing or walking, or jogged for years on pavement can attest to the painful reality of concussive forces. On the other hand, as tourists at the beach learn, soft footing such as sand presents other equally painful problems. Though walking along the ocean’s edge is pleasant, the very sore muscles that appear later that night are not. Hard footing is not without its advantages – it’s easier at take off to do so from a firm surface (or one that gives a bit but resists forcibly, such as a springboard). But the landings that are murder. Landing in soft footing means that some of the force of landing will be absorbed, thus sparing the joints of the front end. But footing that is too soft can fail to offer sufficient support for takeoff (and landing as well), leading to potentially serious overstretching or injury of muscles, ligaments and tendons. In a perfect world, our dogs would take off from firm but slightly springy footing and land on soft but not too deep footing. But so far, no one’s figured out how to make that happen.

The texture of surfaces is also important. A surface can be abrasive (concrete, asphalt, gravel) or slick (carpeting, matting, wet or frosted grass, mud, brushed or painted concrete, ice, snow) or unstable (gravel, matting that is not fixed firmly in place, leaves, loose soil, sand, deep mud, snow) or almost any combination of these qualities. How much the texture will affect the dog’s jumping will depend on just how fast he’s moving. While all of us can walk safely on ice, few of us are foolish enough to try running on it – that’s why ice skates were invented. When sharp turns or changes of direction are added, when the dog is expected to move with precision, the texture of a surface can become a major factor in his jumping abilities. At an international agility competition a few years ago, the conditions were awful – carpeting that might have served as reasonable footing for slow moving breed ring dogs proved far too slick for the lightning fast agility stars. Despite considerable experience, more than a few jumping faults were caused not by any lack on the dogs’ part but by the conditions themselves. (Even in the large open spaces of the group ring at Westminster, moving only at the brisk trot, show dogs frequently lose their footing and slip.) Handlers who wonder about the appropriateness of any given footing might do well to not just walk a course but actually dash around like loonies, as fast as they can with lightning fast changes of direction and sharp turns. Ideally, they should also be sure to jump over things. And do it all while not knowing what comes next. Just a suggestion.

Lighting presents yet another dilemma. Outdoors, this is rarely a problem, though I don’t doubt that jumping right into the sun is as difficult for a dog as it would be for us. Handlers would do well to always check the line of sight toward a jump from the dog’s point of view. Dogs do see better than we do in dim light but remember that’s a generalization that compares all dogs to all humans. Individual dogs may not see as well as their handler in dimly lit conditions. Indoor lighting can present odd shadows that while confusing to the dog may not be noticed by the handler. Additionally, jumps may blend into background objects like arena walls – dogs are color blind (not without color vision), so greens and reds are indistinguishable from each other. A bright red jump set against a background of institutional green may be very hard for the dog to see and correctly judge. Other color combinations may prove equally difficult.

Environment is fairly self explanatory. Cold, wet weather is hard on joints and muscles, making them more susceptible to injury. Even with appropriate warm up, muscles can chill very quickly – keep in mind that even in the heat of August, major league baseball pitchers are brought to the mound with a jacket thrown over those valuable muscles. In cold weather, even what seems a brief wait at the start line or in-gate can result in chilled muscles. Hot humid weather presents a serious threat. Unable to sweat and thus cool their bodies, dogs depend on evaporation over their tongue for heat exchange. There is a very narrow range of tolerable conditions when both heat and humidity are high. Humane handlers simply don’t ask their dogs to perform under environmental conditions that place a dog at risk.

Though very poorly understood by both trainers and judges, the mechanics of distance can defeat dogs even when the footing, lighting and environmental conditions are ideal. The pure physics of a body in motion at any given speed is complicated, but the basics are present in our every day lives. When driving our cars, we know that we need a certain distance in order to turn our vehicles – the turning radius varies depending on the length of the wheel base. The dog’s wheel base is his body length, as measured from point of shoulder to point of buttocks. No matter how skilled the driver, a Chevy Suburban cannot turn in the same tight space that say a Volkwagen Beetle can. The larger the dog, the larger his turning radius. We also understand that the size and weight of a vehicle in combination with its speed will determine how quickly we can stop. A Honda Civic will come to a halt much faster than an eighteen wheeler, even if both are moving at the same sixty miles an hour. The bigger the body, the more distance it travels in any given situation. For a Pomeranian, the fifty foot distance of the obedience ring is like the parking lot at Walmart for a Miata. For a Great Pyrenees, that same fifty feet is a nightmarishly small space in which to maneuver a large body.

For agility dogs, things get much, much worse. The minimum spacing between obstacles is set not in the best interests of dogs or even with any realistic understanding of just how much distance a body moving at speed can consume. In my work on the AKC’s agility advisory committee, the ignorance behind regulations and course design was evidenced when a test course was set up by a very well known competitor, judge and instructor. The final jump in her course (designed for advanced dogs jumping 24″) aimed the dog directly at a cement wall about twenty feet away, probably sufficient but a bit tight for dogs blazing over that final jump. What horrified me was that the matting under that final jump extended at best five feet from the jump; beyond that was only slick painted concrete. To my eye, this was a very dangerous situation.

If we could have created a textbook dog who jumped precisely so that his takeoff and landing were equidistant from the jump, he would have landed two feet from the jump. Assuming this was a moderate size dog, with a body length of 24″ – typical Golden size. Standing still, his body length would comprise 2/3 of the remaining three feet of matting. Moving at a moderate speed(not the high speed expected on an advanced course)a dog with a body length of 24″ would cover somewhere between six and eight feet in one stride. Even if he landed as soon as possible after the jump, stopping on that dime is not possible. The necessary next stride would more than consume the available footing, putting him on slick footing, headed right at a concrete wall.

What shocked me most was that this judge was more than a little disgruntled when I pointed out the dangerous situation. Her reply was typical of many judges and trainers, “But if I move that jump, I’ll have to shift the whole course!” I protested enough so the course was redesigned, but that woman’s attitude is sadly prevalent in the agility community. Courses are designed on paper, and without any understanding of the simple physics involved for the dogs who have to try to solve sometimes unsolvable problems with their bodies. The dogs pay the price for our ignorance.

At the Olympics in Barcelona, there was quite an uproar over the design of the show jumping course and the footing of the ring. It had rained heavily, and despite the best efforts of the ring crew, the footing was dangerously slick and deep. The course design was difficult – ostensibly in order to test the horses and riders – but many riders felt it was dangerously demanding. In show jumping, each successive round becomes more difficult: jumps are raised, and the course tightens. Despite the conditions, horses and riders gave their best. More than a few highly experienced horses faulted out with mistakes due in part to the conditions. Normally, the final round is the one where increased demands separates winners from losers based on the fastest time and the least faults. But in Barcelona, there was no final round. Though several ties existed, the remaining riders as a group agreed that under these conditions asking more from their equine partners was unfair; they were unwilling to put their horses at risk. Their decision was a moving reminder that even when facing the possibility of an Olympic medal, we have an obligation to do what is best for the animals who willingly give us their all simply because we asked.

The best handlers I know are the ones who spend countless hours training their dogs, who drive hundreds of miles and spend countless hard earned dollars in their pursuit of titles. They do what every competitor does, but then they take it one step further. After all that, they then consider whether the conditions are ones that are fair and reasonable for their dog. When the answer is no, they vote with their feet, unwilling to trade their dog’s well being for the possibility of a qualifying score. Like Goldilocks, they’re willing to wait until the conditions are just right.

Read all in this series: