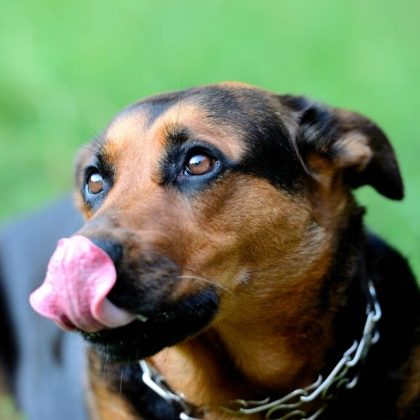 There are a few phrases that really push my buttons. When talking to trainers, the one that will always get a reaction from me is this explanation for why the trainer used a specific technique or piece of equipment: “I had to.”

When pushed to explain further why they “had to” it very often turns out there were other options available, but the choice was made to use that technique or equipment for reasons such as “Well, the class was nearly over” or “the client was frustrated” or “I had tried everything else” (really?), and so much more that has nothing to do with a careful analysis of the dog, the behavior, the situation or training methodology. Worse still, the trainer often attempts to rationalize it as if the animal left the trainer no other options.

This has always bugged me, and reminded me of something else but couldn’t quite put my finger on it till I was reading a novel recently. The wife abusing husband justifies his behavior by telling his wife that she had actually caused him to beat her because she hadn’t been [fill in the blank – attentive enough? quick enough? pretty enough? etc].

There are situations in which the use of force to defend yourself or defend another being is justifiable. Our criminal law allows for this, and yet also places a burden on us to utilize any other options available to us before we use force. It would be good for dog trainers to also be held accountable for their use of aversion and force in this way. I wonder what would change if trainers had to to build a case for their actions, including specifics of what other options had been considered, employed and discontinued or discarded before even trying them.

The most common example is the “positive” trainer who nonetheless shows up with a prong collar on their excitable dog. Watching the dog tow them into the seminar, I see that they are contributors to the process. After all, it takes two to tango, and two to pull. Dogs never ever pull off leash. But as the trainer stands with taut leash and a dog who is connected to them only by equipment, I consistently hear, “Well, I don’t really like to use this collar, but he’s so excitable, I just had to use it.” What’s left on the table as other solutions to the pulling dog doesn’t get mentioned: positive reinforcement, consistency in expectation for on-leash behavior, actual training for on-leash manners, appropriate handling of the lead to eliminate the handler’s pulling, teaching self control, etc.

Whenever I use force, I do three things:

I am the prosecutor, the defense attorney, the judge & the jury all in one in my role as a trainer, and I am also the defendant on trial for my decisions. Kind of a Paw & Order thing, because sometimes there are also detectives involved who round up all kinds of evidence that will be brought to bear. If I’ve ignored past behavior which would have predicted the animal’s response, then the prosecuting attorney asks quite firmly, “Why did you choose to disregard prior knowledge?” My defense attorney doesn’t have much to say. If I’ve ignored warning signals, sometimes my defense attorney can make a good case for simple incompetence, that I just was not sufficiently familiar with this particular animal to correctly read that individual’s signals. Having learned my lesson and apologized profusely, I am released (on probation!) as all involved are sure that I won’t make that mistake again. Mistakes made from judgment calls gone awry are usually forgivable offenses, provided I’m not brought up again on the same error. All past offenses may be brought to bear; no protection from having a sealed record, no prayer of having the record expunged. I think it’s a good thing for a trainer to remain honest about their mistakes past and present. Keeps me honest.

Replacing the phrase “I had to. . .” with “I chose to. . .” puts the responsibility where it belongs: on the trainer who made the choice to use techniques or equipment. It helps us all remember that in making that choice, by definition we excluded other possibilities. When using force, we need to be very clear that in discarding other options, other possible solutions, we may also be choosing to limit what is possible when we push ourselves.

Many years ago, while attempting to demonstrate some no-pulling techniques in a seminar, I was utterly exasperated by a young Labrador. Clancy had leaped up and head punched me very hard not once but twice, making me see stars and really hurting my nose. Clancy was not malicious or intending harm, he was just an exuberant adolescent who had been taught that leaping around was acceptable. Not being physically sensitive himself, doubtful it dawned on the dog that a head butt was very painful to a human. I had been patient, kind, vaguely successful but by the second slam to my face, my patience began to shred. I began to think, “One good correction might get through this dog’s thick skull.” I surprised myself by thinking that, but then I further shocked myself (and some of the audience) when I asked the handler explicitly for permission to use a physical correction on her dog. She agreed, trusting me as a trainer to do right by her dog.

In that moment when she trustingly agreed to let me use force on her dog, I found something in myself that surprised me further: a little voice that challenged me to push myself further, to help this dog without force. It was like having a gauntlet thrown down at my feet. Do it without force, without ego, without justifying force.

Internal challenge simmering in my mind, I decided to see how far I could go before I chose to use force. I was very clear in my mind that using force was a choice I would make, not something I was forced to do. I persevered, patiently applying the techniques I’ve used with countless dogs, a positive approach that does not involve pain or aversion and seeks to engage the dog’s mind, not control his body. I never did use force on Clancy; and I was successful in helping him find a new way of walking on leash. His response was nothing more than a lack of knowledge and skills. How on earth could I justify using force on a dog whose only crime was not knowing how to be right?

Very few in that audience would have blamed me if I had chosen to use force. They had all witnessed how hard I’d been hit in the face by the dog’s head. They had all seen how much time I’d already devoted to trying to do things positively, and most would have given up long before I did, as if there is a certain amount of time to be spent trying and then all hope is lost and it’s okay to use force. This particularly makes me very sad because getting trainers to learn what real patience means is something I strive to do in my work — so I nearly sent the wrong message by almost going down the “I had to. . .” road. In fact, more time, more patience and thin slices did the trick, as it almost always does. My inner voice held me accountable, helped me find more patience and fresh eyes for what this dog needed to succeed.

I think about that dog, Clancy, a great deal. I have carried him for years in my heart and will continue to do so. I will keep seeing his owner’s trust in my judgment as a trainer, will keep seeing Clancy’s bright, trusting eyes. That inner voice that holds me accountable is one that challenges me to find new ways always to keep the light in those eyes, in all the eyes that turn towards me. It is my job to not betray the trust. I hold myself accountable for what I choose to do, and that is never explained away by the phrase, “I had to. . .”