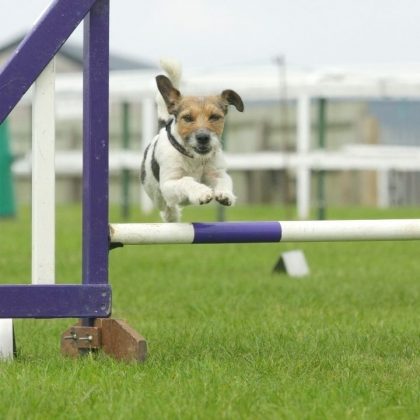 NOTE: This article is the second in a 4 part series on jumping that first appeared in Off Lead magazine.

Dog sports today require that dogs be able to jump, and to jump often and well if they are to be competitive and to stay sound. Jumping problems are common, but rarely viewed as the dog’s way of saying, I’m doing the best I can. Whatever your approach to teaching a dog to jump, whether you choose to check, chum, shock, drag, trip, trick or click the dog in an attempt to fix a problem, the truth may be the dog physically can’t do the job. Unfortunately for dogs, most training is predicated on a big assumption – that the dog can do what we’re asking. We probably wouldn’t write a check without making sure there were funds to cover it, but we rarely investigate if our dogs are physically capable of jumping!

To get a sense of how jumping ability is affected by physical limitations whether structural (your dog’s skeletal framework) or functional (your dog’s muscles, etc.) let’s take a brief look at the basic mechanics of jumping and how the dog’s body responds both structurally and functionally.

At takeoff, the dog brings both hind legs well under his body, deeply flexing the joints (hips, stifles and hocks) while bringing into play the powerful, complex muscles of the hind legs. If any of the hind limb joints (hip, stifle, hock, pasterns and feet) are poorly structured, the dog will have problems. Our fixation on hips sometimes leads us to forgetting that the dog has 238 other joints which must also be in working order. It is possible to have an OFA excellent hips and have poorly constructed knees or hocks. “But his hips are good!” is the equivalent of saying that a car that’s not running well has brand new tires.

Though not as obvious, the muscles of the pelvis, lower back and abdomen are also involved at takeoff. The very strong back muscles work in tandem with the abdominal muscles to coil the dog’s body (and help control the body and hind quarters during the descent phase). These muscles also interplay with the complex muscle groups of the pelvis. If any of these muscles are sore or weak, or there are structural problems within the spine or pelvis, the dog’s jumping style and ability will be affected.

At takeoff, the dog’s front end lifts and begins to fold, literally tucking the landing gear out of the way for the duration of the flight. By time the dog’s body has reached the highest point of the jump arc, the legs are as tightly folded as they can be. As the dog passes the highest point of his trajectory, the front limbs begin to unfold during the dog’s descent. The dog lands on one foot, quickly followed by the other front leg, and then the hind legs.

Structurally and functionally, the dog’s front end takes the greatest stress of jumping and thus needs to be sound, strong and flexible. With every landing, there is a moment where one front foot supports the full weight of the dog and then some; every ounce of the dog’s body weight is multiplied by factors such as the height of the jump and the dog’s speed. (Handlers with overweight dogs need to keep in mind that every extra pound on the ribs translates into many more on the paw when the dog is jumping.)

The front end is designed to absorb the force of landing. Any stiffness in the joints of the front leg (right down to a jammed toe) will impact the dog’s jumping. To get a sense of how the rest of the body is affected if the front cannot flex and absorb force as it should, step onto a small bench, lock your knees and jump off onto one foot. Ouch!

In every stage of the jumping process – from approach to landing – the head and neck play an important role in adjusting the dog’s center of gravity. Full range of motion in this head and neck also points to flexibility of the muscles deep within the neck and chest which are responsible for the workings of the front limbs. These muscles are often not considered since they are hidden beneath the shoulder blade. A lack of flexibility in the front legs, neck and/or chest will result in a number of jumping difficulties, particularly in folding up the legs and in absorbing landing forces.

A limitation may not affect the dog’s jumping ability at every level, just like certain mechanical problems will not be problematic in a car unless you exceed a certain speed or drive under certain conditions. The greater the demand, the more the limitations become apparent. At a moderate level of performance, a dog with problems might be able to compensate for a long time without having obvious jumping problems. When demands become more intense, limitations not recognized earlier may become apparent, leaving handlers scratching their heads over this sudden jumping problem. The limitations have probably been there all along; the new intensity of demand simply made them obvious.

Generally speaking, dogs can more readily compensate for hindquarter limitations than any problems in the front, since by design the dog normally carries well over half his weight on his front. But such compensation means additional stresses that, over time, begin to destroy the dog’s front end. I’ve met dysplastic dogs whose handlers continued to jump them despite the known hip problems. In compensating for the limitations of their hind end, the ligaments of these dogs front feet had stretched, leaving the feet very noticeably flattened and unable to function properly. This in turn meant all other joints in the front end were now taking an even heavier load, thus accelerating their eventual breakdown, thus affecting other parts of the dog’s body and so on.

It’s a rare dog who doesn’t have some limitation somewhere, so it’s important to understand how physical limitations affect a dog’s jumping style and ability. When trying to evaluate how serious a limitation may be or whether it is a limitation that be minimized or improved, here’s a tip: if the bones or joints are hidden under the visible masses of muscles, then the function of that area may be able to offset or partially compensate for structural problems (thus dysplastic dogs can be kept quite functional provided the muscling is maintained or improved.) Function can be improved, so limitations in an invisible bones area may be agreeable to change. If the bones are easily seen or felt, the structure of that area had better be right. You won’t be able to improve much if anything.

Dogs jump according to the best of their understanding and to the best of their ability. Dogs hit jumps because they can’t find a way to avoid doing so – I’ve never met a normal animal who tripped themselves or banged their feet because it felt good. Jumping problems need to be resolved. But before rushing to find another technique, take time to see what the dog himself will tell you through his own body. Very often, you’ll find there is a structural or functional problem at work.

Read all in this series: