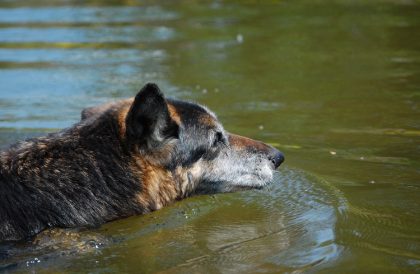 I’ve now read several of the articles written on this study, and chose this one as it’s the least cloying or annoying to me. Your mileage may vary. You will find takes on this study everywhere.

I cannot help but feel that this study is interesting and yet missing something crucial, or perhaps looking at things from the wrong end. And then when tackled by popular press, it all gets worse. The example provided about Morrill’s first Papillon vs her 2nd Papillon — well, what the hell is the point of that? To me it’s like saying someone’s high school romantic interest was a neurotic but their college sweetheart was wonderful. Um, yep. And they could even be from the same race, culture, socio-economic background, even have the same eye color and hair color! What is the surprise? Dog A is not the same as Dog B?

Zero surprise to anyone with extensive experience in any breed that the individual dogs are just that: individuals. Dogs never, ever read their breed standard or a Wisdom panel. I’ve got 7 GSDs laying here and have raised 11 generations of the danged dogs, and every single one of them had a different personality, different interests, different skill sets.

As I always say, when you’re talking about dogS with an S, that S stands for statistics. The individual dog is just that: an individual.

However, having said that, what is a breed if not a collection of specific genetics put together in a way that – ideally! – not only creates a certain appearance but also certain behaviors and characteristic responses?

What the articles I’ve read about this study seem to miss – or simply choose to ignore – is that every breed has a Bell curve. Breed standards attempt to describe the middle of that curve, not the outliers on either end. However, this does not change the reality that outliers do exist. Nor does it negate that breed standards are intended to describe what an ideal specimen will look like, move like, and behave like relative to dogS in general.

Somehow, tangled up in these articles and this triumphant crowing only this % of a given behavior being heritable, they are missing the reality that breeds exist because we can consistently keep creating the recipe of that breed. And that is no different from brownies, for God’s sake. Some are underbaked and some are burnt to a crisp, and some have missing ingredients, and others have ingredients that just wreck the whole thing (vegemite not being a useful additive to brownies, for example). And some brownies are sublime with a blend of ingredients that reflects what the baker intended.

Dogs as brownies, breeders as bakers. Dog owners as consumers frequenting this bakery but not that one. Clueless consumers assuming that any bakery offering brownies will have brownies that meet their expectations. There’s a reason we go to Bakery A but never to Bakery B, or eat at one restaurant rather than another. But we have to learn. And we have many many more opportunities to learn about bad brownies or restaurants with bad chefs. We’re not locked into a 10-15 year relationship with that bakery! JQP does not get enough opportunities in a lifetime to experience the variety of individual personalities within a breed. Thus they assume that their limited set of experience equals an understanding of a breed.

Let’s take that a bit further: A restaurant can write what it likes in the menu about succulent X and juicy Y and spicy Z but if the cook uses crap ingredients, overcooks it, undercooks or just is a terrible cook, what the menu says will bear little relationship to the food on your plate. A bad breeder can promise whatever they like in their marketing or quote from a breed standard, but that may bear little to no relationship to what the individual dog’s behavior may be.

But people read breed standards as if they are some sort of guarantee of what a dog will be, and they end up disappointed or shocked or bitten or heartbroken. We’re talking about the same consumers who can be marketed to so that they wear brand X or drink brand Z or drive vehicle W because that will make them cool, beautiful, successful, etc. And again, limited experience, big investment emotionally, not many chances to learn how to get it right.

Good breeders struggle hard to find and create and maintain their vision of what a good [fill in the breed] should be. Because there *are* breed characteristics, behaviorally speaking. Of course there are. It is not just a merry assortment of individual personalities some of which are packaged in similar wrappers.

And maybe that’s what missing and bugging me. That the popular articles I’ve read on this study want to emphasize that breed doesn’t matter. As a professional trainer, and as a long time breeder of German Shepherds, I’m here to say breed sure as hell DOES matter. But it is not a guarantee.

Might I find an amazing Ovchartka able and willing to live in a busy suburban neighborhood who enjoys having the neighbors visiting constantly? Um, sure. Would I bet on it? It is highly likely to be a needle in the haystack hunt. Because breed is a collection of genes that shape the behavior. And the Ovchartka was not developed to be a suburban companion. I’ve got a much better shot at finding a friendly, tolerant, people loving Labrador. Does that mean all Labradors are friendly or people loving? Absolutely not. But the Bell curve on behavior traits in the Labrador popular is different from the Bell curve for Ovchartka.

Genetics, early puppyhood development, socialization, training, environment, experiences: these all combine to create the individual dog. In my experience as a professional, you can maximize the genetics with appropriate early puppyhood development programs such as my Enriched Puppy Protocol, something borne out in the experience of the guide & service dog schools as well as private breeders using my program. But the best early puppyhood program will not *install* genetic traits or delete unwanted ones. Genetics are often more about potential and possibility than strict determinism.

But perhaps this study and all the popular press it is getting will help if the outcome is that JQP gets the idea that what the breed standard says may not be reflected in the dog or puppy they select. That, as Dr. Ian Dunbar has said forever, all dogs are still completely 100% dog. No one has managed ever to breed Dog out of dogs of any breed. Each individual dog remains fully capable of every dog behavior from biting to nurturing, from protecting to killing, from playing to hunting. We just play with the recipe. And we would be wise as consumers to recognize what makes a good dog just that, and it’s not about words or marketing or championships or titles. It’s about temperament traits that make a dog a good fit for the life they are expected to fit into or share.

That’s how we can be most helpful to JQP. Not telling them breed doesn’t matter. It surely does. But that behavior and temperament matter. They surely do! This study confirms what all good breeders have known forever: genes are not destiny. But they sure as heck do matter.

Side note: As for the claim that purposeful breeding of dogs originated with Victorian times — I would encourage a more complete investigation into this claim. I’m no expert but I’m aware of many breeds far older than than 200 years. The Romans seemed to have had a nice handle on breeding Molossers for war. Maybe have a look-see at Dr. Caius’ writings, in his book Of Englishe Dogges (1576). Or read up on the Saluki, “royal dog of Egypt, is perhaps the oldest known breed of domesticated dog. They are identified by some historians as a distinct breed and type as long ago as 329 B.C. when Alexander the Great invaded India.” (Source- Saluki Club of America website).