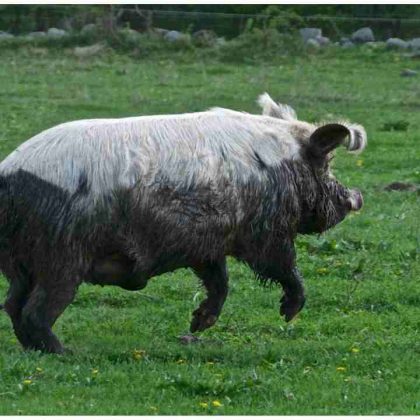 Looks like winter’s grip on the farm is loosening. The redwinged blackbirds are back, staking out their territories with their distinctive calls. I saw a killdeer working some snowy fields – a surprisingly early return, I thought, until the next day when the rains had turned the snow into puddles seeping into the ground. The willows are already blushing with their thoughts of spring, and the maples are running hard and fast. They say this will be a great year for maple syrup.

But I think perhaps the animals most relieved that spring is close to springing are the pigs. While it was a fairly mild winter in terms of snowfall, the last big storms did pile up some serious snow. Which makes things tricky for a pig. The cattle and horses handle things differently.

The cattle are Scottish Highlands, so by design stocky, with low ground clearance, and powerful bodies that help them plow through the snow. Like patient commuters, they create their annual paths to and from the barn area back to the other fields and wooded areas. Stuck behind a slower cow or a more dominant one, they remain a lot like cheerfully polite drivers, content to move along until a passing zone presents itself.

The horses are leggier, so the snow presents less challenge, and specific paths are not as important to them. Snow has to be very deep indeed to create problems for the horses.

The pigs – Spot, Bear, Muriel and Ian – all enjoy their daily walkabouts out in the cow pastures. It’s a rather charming scene, as pigs and cows pass with a polite greeting of a slight head bob, not unlike a friendly wave from one person to another as they pass on the street. Sometimes they stop for a brief chat before moving on. But mostly, it’s a passing greeting.

Pigs are poorly suited for deep snow. Those short legs and small feet plus bulky bodies make it difficult to navigate, and yet, with determination and power, the pigs created paths out of their pen and into the pastures, where they could use the cattle’s single lane highway. This was workable, and they would fall into line, one behind the other, on their trips from here to there and back again.

Until the day when John needed to feed the barn a bit earlier than usual. It was a lovely winter’s day, so the pigs were out and about, fairly far from the barn, when they realized it was dinner time. Now, in milder weather, they’d simply make a piggy calvary charge, every hog for himself, age and speed being the only factor as to who got their first. But this day, the porcine commuters were headed away from the barn, single-filing along the cow highway.

Try to imagine four large motorhomes creeping along a single lane road — and then a call comes in that tells them they have won the lottery but to pick up their winnings, they have to go in the other direction. Immediately. It is not easy to turn a motorhome around on a single lane road. Especially when there are three other motorhomes trying to do the same thing.

With much jostling and squeals of frustration and no small bit of desperation that they might actually miss dinner, the pigs did get themselves turned around and headed to the barn at speed. In single file. Maddening to the younger faster pigs to find themselves behind old Spot, who is slower but also considerably larger and stronger.

With the snow gone, the cattle just spread out a bit more as they walk their well worn paths. The horses sigh as they pick their way through the mud. But the pigs? I think some of their dreams still contain that nightmarish commute, The Day Dinner Came Early. When I watched them yesterday, sprawled contentedly in a piggy heap in the mud, spring sun baking their grateful hides, I thought I heard a few frantic murmurs as they dreamed.