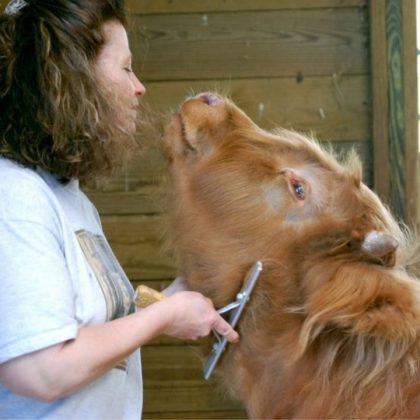 In a household that already contained 11 dogs, a kitten, 3 tortoises, 2 parrots, a pair of parakeets and a tank of fish, you’d think adding just one more living creature couldn’t make that much of a difference.

And then came Storm.

Storm is a Scottish Highland calf. His mother is an aging lady, and the years have taken their toll on her 16 year old udder. The milk bar sagged too much, and being a large! calf, Storm was born with slightly contracted tendons. The combo proved to make nursing impossible, so reluctantly, the little fellow was scooped up into a life of bottle feeding.

One problem when a calf can’t nurse promptly is that they do not receive the all-critical colostrum which provides much needed antibodies to give their immune system a kick start. Lacking this, Storm was treated with colostrum replacer, but towards the end of the brief window where his intestinal lining was permeable and would allow the antibodies to pass through. So we crossed our fingers and said a lot of prayers, knowing that chances were good he’d end up sick, unable to battle germs & disease as he might have been normally.

As all parents (and animal people!) know, babies crash fast, and babies crash hard. In one afternoon, Storm went from a bright, playful creature to a dull, feverish animal in a lot of trouble. Winter crept closer, or so it seemed to me, snaking icy fingers towards the stall where he lay cold and shaking despite a high fever. He looked shockingly small, laying with his head in my friend Wendy’s lap. Blankets, TTouch , acupressure and Reiki were all brought to bear while we waited for the vet to call. She confirmed our worst fears — he was proably septic, an infection raging through his body. Good old fashioned penicillin, warmth, hydration & nursing care were all we could offer.

Which is how Storm came to live in the house. He’s not the first calf to live in the house, nor even the first farm animal. For 5 months many years ago, my donkey Freaky Deaky lived in the basement while he recovered from a near fatal illness. And over the years, Sally Jo the goat, Cooper the duck, Jose the rooster, Amelia the hen, Little Bear the piglet, ZuZu the calf, Walter the turkey, a whole litter of 10 orphaned piglets, and others. We can do a lot with some tarps, blankets, duct tape, boards, ex-pens and crates, and a heat lamp or fan as needed.

It was just before Christmas that Storm needed help. I had some dim notion of installing a Christmas tree in the living room, right where the calf pen needed to be. On Christmas morning, we toyed with the idea of decorating the calf, but he wasn’t feeling up to such folly.

It was somewhere around April when Storm moved back to the barn, strong, healthy and ready to sail into life. He never has looked back.