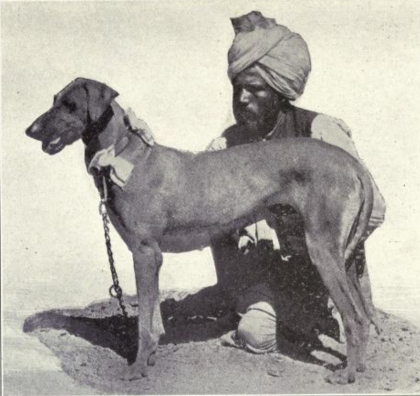 Once again, a tip from my good friend Ginny leads me to a very interesting book, this time one from 1915. Dogs of All Nations, by W.E. Mason was intended to be a concise, affordable collection of various dogs of the world, created for the 1915 Panama-Pacific International Exposition. He does not intend it to be exhaustive, but more like any number of field guides available today.

Despite the brief entries for each breed, Dogs of All Nations is a wonderful collection for any dog lover. Those with an interest in and knowledge of the show world will find that there are breeds shown that are not much different today than these nearly 100 year old photos. And yet other breeds are shown as they appeared back in 1915 — hardly even recognizable as the current rendition of the breed, such as the Bull Terrier (the 1915 version still looked like a dog, not a dog/pig cross who had a bad accident at top speed with a brick wall), or the splendidly corded Poodle who is truly awesome to behold and a far cry from today’s canine topiary. Some breeds are ones that may have disappeared, such as the Kerry Beagle. Even with the terse descriptions offered, there are wonderful gems of history for some breeds to be obtained by a close reading.

Lots of neato trivia available here with which you can amuse (or annoy) people. Such as,

The descriptions of the dogs and breeds can be surprising and rich in the choice of words. You’ll discover which breed is described as a “lean looking and by no means elegant” and whose “eyes convey a sour expression.” (I’m rushing out to get a Balearic Greyhound tomorrow – who wouldn’t want their very own inelegant dog with a sour expression?)

Ever wonder which breed is “endowed with an abundance of common sense”? You’ll find it here. (The Dandie Dinmont) Thinking of a dog with a ‘savage, sullen look” though also described as “not less than 160 pounds” of “courageous, grim, earnest” dog? Look no further than the 1915 model of the Tibetan Mastiff. By contrast, the Bassett should show an expression of “reproachful dignity” and the Dupuy Pointer is notable for the eyes of “rather melancholy expression.”

I was bemused by the entry for the Scottish Terrier, which notes that the dog “should appear higher on leg than he actually is.” How is that achieved? I’d like to know, being a wee short legged myself, but sadly, no hints are provided.

There is a fascinating note for the Shetland Sheepdog (which little resembles the modern Sheltie): “This variety is of recent origin, the questionable intention being to evolve a toy collie. The weights aimed at are between 7-10 pounds, and the color and conformation throughout should follow the collie as nearly as possible. Considerable strides have been already made in this direction, though this author does not regard the nature and disposition of a collie as suitable for lap-dog purposes.”

Even back then opinions varied about what was fair or ethical in the pursuit of breed type and appearance. Under the Manchester Terrier entry, you’ll find a discussion of the English Kennel Club’s ban on ear cropping (already in place by 1915; Americans are s-l-o-w to catch on to some ideas), and a dismissal of the idea that uncropped ears decreased the popularity of the Manchester. Mason states in no uncertain terms, “… a tremendous amount of suffering has unquestionably been prevented as a result of the English Kennel Club’s ruling, and all good sportsmen will endorse its decision.”

The weights of dogs then vs. now made me wonder if dogs were simply denser then? Well boned and well muscled dogs are indeed heavier, to be sure. But the Labrador is listed as a 26 inch tall dog weighing in at 80 pounds (and not at all like the short cubes of today’s show ring), and my own breed, the German Shepherd Dog, is reported at 22 inches (now the bottom of the standard for bitches) and only weighing in at 55 pounds. There are also reports of some toy breeds being shown but weighing only 1.5 pounds! Since that’s what our pups can weigh *at birth* it seems hard to accept that these weights are entirely accurate. One thing is consistent throughout — none of the 1915 dogs appear overweight!

The history and training sections that appear near the back of the book are well worth reading. And more – how working sheep dog trials began in 1873, some excellent training tips on the young herding dog starting at 3 or 4 months of age. The story of Dubby, “a magnificent specimen of the McKenzie River huskie” who had a record of 30,000 miles in harness to his credit. Police working dog trials are explained, and are surprisingly close to today’s Schutzhund trials, though I was interested to see that the 500 yards of tracking could be done both on and off lead.

Fascinating history of ambulance dogs in war, how the French delivered water to wounded soldiers via dogs, and how a dog named Mustache was given an award for valor by Napoleon.

Enjoy the glimpse into the past, and be reassured, dog people back then were just as crazy as any dog people today.