Home / Blog / When Is a Refrigerator Like a Morgue? 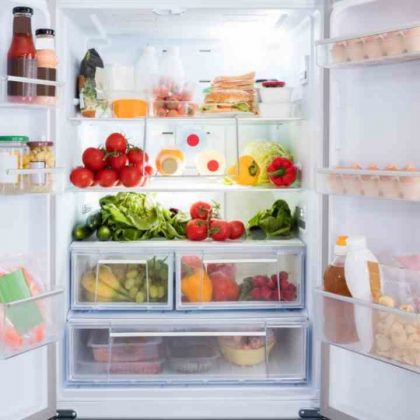 At a farm show many years ago, I came across Nok Out, an odor eliminator which is better than anything I’ve ever seen (and believe me, with this many animals, we’ve tried plenty!). It has no real odor of its own, and the demo lady had me dip my fingertip in pure ammonia and then smell my finger. (As if I couldn’t smell the ammonia from a foot away! but I went along with the show). Then, with some fanfare, she spritzed this stuff on my finger and – bam – ammonia totally gone.

I was beyond impressed as I often am by simple demonstrations, particularly those that promise to aid me in the long lost battle to become even a poor housekeeper. Putting Nok Out to the test and using it around the house, I’ve remained impressed. It even got rid of cat pee on top of the refrigerator! Not something the average person needs to do, perhaps, but I’m reporting faithfully from the front here at Little House of Horrors on the Prairie.

And unlike Nature’s Miracle which needs to remain wet for as long as it takes for those little enzymes to work, this is a shoot & go
thing. (BTW, I hope everyone knows that you can’t mix up Nature’s Miracle ahead of time – it needs to be mixed fresh each time, making it a pain in the butt when there’s an accident & all you really want to do is clean it up & move on. Patience re: cleaning is not one of my stronger traits.)

I was also impressed that Nok Out is non-toxic. One of the recommended uses is for ostomy patients to use as a personal deodorant, and it can be used on protheses as well as in vaporizers in sick rooms. Despite fully understanding that these were notable and noble attributes for any product, I had a very hard time keeping a straight face during this sales spiel. I was having trouble imagining that these were points that Joe Average was likely to inquire about when shopping at a farm show.

My poker face began to crumble in a big way when the sales woman earnestly told me in her most sincere and confiding voice that – and I quote -“Nok Out is even used in funeral homes & morgues.” At the time, this did not strike me as a major selling point except perhaps to Medical Examiners and undertakers but then again, I’m not a salesman so may be unaware of how best to promote a product to the public. Swallowing my laughter, I bought a few bottles and headed home to put it to the test. Nok Out proved itself a good buy, though I did not suspect that the saleswoman’s words would come to life in a very real way for me.

I’m not sure about your refrigerator, dear reader, but ours has black holes where foods go to die in private, much as washing machines have strange vortices hell bent on attracting only one sock from any given pair. And our dogs’ refrigerator has a darker side, dedicated as it is to vast quantities of raw and often bloody meat, liver, bones and other foodstuffs best suited to those who think a litter box is an hors d’ouevre tray.

As happens from time to time, something had died a terrible and lingering death in the dogs’ refrigerator – nothing we’d witnessed, mind you, but we had a big clue in the smell that wafted out each time we opened the refrigerator. Unable to locate the problem, we began to warn others in the vicinity any time we had to open that refrigerator: “I’m going in. Hold your breath!” This went on for quite some time, till the fine summer’s afternoon when I issued the standard warning to my friend Wendy, who obligingly grabbed a lungful of fresh air and waited. Out of the corner of my eye, I spied the bottle of Nok Out, and the saleswoman’s spiel replayed in my head, “…even used in funeral homes and morgues”!!

Lunging for the bottle, I threw open the refrigerator door and began spraying Nok Out generously as I triumphantly crowed to Wendy, “Well, if it works in a morgue, it ought to work in my refrigerator!”