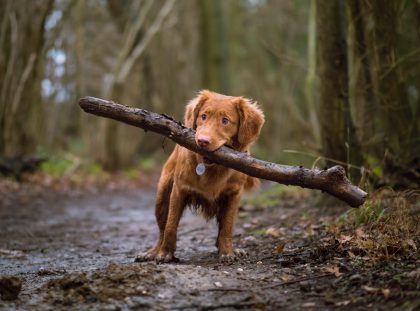 One warns, “Do not think about it.”

Do you know the difference?

Resource guarding is a broadly applied – and often inaccurately used – label that gets dogs in a world of trouble, even put to sleep.

Simply put, resource guarding is about the dog’s anxiety that something he values will be taken away, and his attempts to warn others away from his possession.

By dog law, possession really is 9/10ths of the law. A dog is entitled to try to retain anything he has in his possession, regardless of who is asking him to give it up. The smallest four week old puppy can growl, keep his bone and turn away from an adult male, and be acting perfectly appropriately by canine standards.

Human expectations are that we have the right to take whatever we want whenever we want. This put us at odds with the dog’s natural behavior. Understandably, dogs can get aggressive when we act in ways that would be wildly inappropriate among canines. The dog’s anxiety can exacerbate the situation further.

Rule setting differs from resource guarding in significant ways. The same dog law “what’s mine is mine” applies, but:

The resource guarding dog typically is positioned very near the place, thing or person/animal to be guarded, with the overall body language compressed and often quite still. The perceived threat will receive sideways glances (usually eyes do the moving, not the head, resulting in “whale eye”). The head may be lowered (slightly or dramatically) with the muzzle, chin and even throat and part of the chest over the object.

The rule setting dog is typically positioned in a comfortable place not necessarily near the object of possession, but one that offers a clear line of sight to the possession. The dog may appear quite relaxed and unconcerned until someone is very close to his possession, at which point he will become very alert and react.

Excerpted from The Connection Collection