A Scarlet Macaw’s Lessons in Honesty 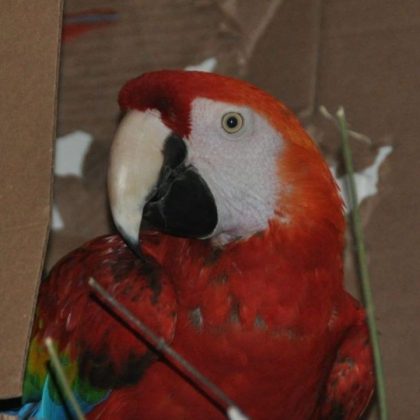 In this one simple sentence, Kingsolver sums up not just the value of honesty, but defines why the quality of immediacy in an animal’s communications has such a profound impact on us, the species who struggles with truth.

Like a child who has not yet learned to dissemble, animals give us their truth, unvarnished, unrehearsed, without guile. In accepting that gift which is both wonderful and terrible, we have a chance to grow because we are not shielded or protected from the double-edged sword of truth. Far more hurtful is the human version of edited, rehearsed dishonesty that sometimes purports to protect us but in the end, can wound deeply.

As I learn more about our scarlet macaw, being ready for accepting her truth (whatever that is in the moment) has helped me practice many times a day offering a possibility but also holding a readiness to hear her truth, which may be to agree with my offer or reject it, sometimes in dramatic macaw ways. (Such a drama queen! she’s not unlike a flying German Shepherd . . .)

But the willingness to hear her truth includes being deeply touched and amazed when she chooses to make the trip across the room to climb up next to me, and be there with me. That truth of that moment: wonderful. She did not rehearse what she would do or how she would approach me. She simply looked down from her favorite very high perch, decided she wanted to be with me, and made that happen. How flattering is that!?

In the animal’s truth, we are reminded of the power of our truth in our relationships with each other. Not The Truth, but *our* truth which contains integrity, awareness and honesty. Easier said than done, no question.

Would that the humans around us could be as truthful and clear as any of our animals . . . People rehearse and dissemble and deceive and edit. That pre-frontal cortex has some serious drawbacks. In the end, homo sapiens is a difficult though ultimately rewarding species. But I’ll keep plenty of other species around me to keep me balanced, optimistic and learning about what honesty and integrity in a relationship really means.