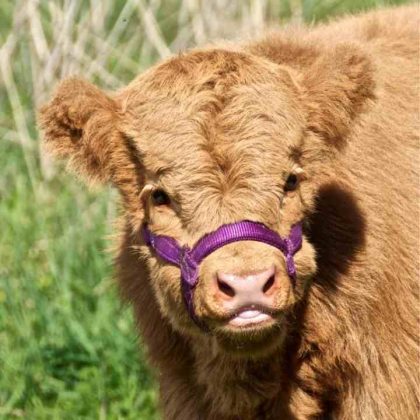 In the lexicon of farmers who spend their days with cattle, there are poetic descriptions. A first time mother-to-be is a “springing heifer.” A cow with a newly born calf is said to have “freshened.” These are apt and lovely descriptions, as I learned one morning many years ago.

Dandelion was one of our favorite cows. Long past her first exciting moments as a springing heifer, she was an experienced mother. This particular morning, in the cool promise of spring breezes, she had freshened, delivering a dark red heifer calf. I did not see the birth, though Dandelion’s swollen udder had pointed to impending delivery.

Not noticeably smaller this morning despite the calf’s move from inside momma to out on terra firma, Dandelion nonetheless drew my eye as she stood just apart from the rest of the herd who were happy with their morning meal. She half heartedly looked at the hay, then turned to stand as if searching the far pasture. Then I saw the bloody discharge that still clung to her tail and hindquarters, and knew that she was searching for her calf though I could not see one anywhere in the pasture.

Dandelion called, and called again. Through the fence, out in the lane leading to the lower pasture, there stirred a dark red calf who answered its mother’s voice while struggling to unsteady feet. I raced to shut off the electric fence that separated momma and calf, who must have wandered through the fence when I had it turned off to feed another group of cows. Dandelion called, and her baby answered, a duet that continued as each step on barely used hooves brought the calf back to her side.

What then to name this new freshening of the world? From Dandelion, my mind moved easily to Buttercup. This name called up refrains from Gilbert & Sullivan, and describes summer pleasures of lush grass and meadows strewn with nodding yellow heads, I say “Buttercup” and remember a childhood test to see who loved butter, easily determined by holding a buttercup just under a chin and looking for the reflected yellow on the skin. When I hug this calf, will those who care to look see a reflection of her mahoghany red coat on my chin? Perhaps not, but it will matter not a whit – reflection or no, this calf will be loved.

The arrival of a calf is hardly a headline moment. It is a simple joy (though not a simple thing) and outside of a few interested friends, this moment and others like it go largely unnoticed. And yet I cannot help but think that it is through such daily miracles and small but glorious ways that the world itself is continually freshened anew. And in little Buttercup herself, I saw what I see in every newborn: a glimmer of a promise that someday, she too will freshen the world in her own way.

Here’s to spring and springing; here’s to fresh breezes and a freshening of the world. May you find it all not only in your physical world, but also in your heart.