The Fine Art of Observation

Home / Articles in English / The Fine Art of Observation 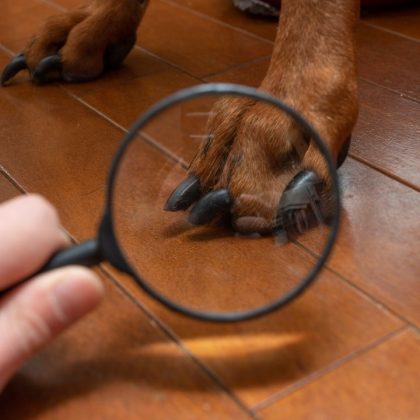 Understanding, analyzing and resolving behavior or performance problems requires a good deal of detective work. As the famous Sherlock Holmes knew, no detail, however small, is insignificant. The more acutely you are able to observe the dog, the more accurate your analysis will be. Acute observation and attention to detail is the hallmark not only of great detectives, but of great trainers.

One of my most bemusing moments as a trainer came when I was working with a dog who had bitten several people. As I worked the dog over a variety of obstacles, his owner commented several times, “I can’t believe he hasn’t bitten you yet!” I never could decide if she was simply amazed or just disappointed. I wasn’t bitten because I watched the dog for even the smallest sign that he was beginning to feel threatened.

With this dog, subtle changes in his breathing pattern, a compression of the lips and a constriction of the pupils gave me the only clues I needed. At that point, with no further clues and without pushing until I saw more dramatic signs, it was a simple matter to shift our activity to something less threatening and allow the dog to calm down. Ignoring these clear but subtle signs would have undoubtedly caused the behavior to escalate until perhaps we had a full blown aggressive episode ending in a bite. (This dog has gone on to become a wonderful companion who easily earned his CGC certificate, and a photo of him in Santa’s lap at a “Photo With Santa” fund raiser remains my favorite of him.)

Dogs live and act in a world of exquisitely subtle signals in their interactions with each other. Our observations and communications in our interactions with them must seem unbelievably coarse at times to these sophisticates of non-verbal communication. Turned around the other way, we would perceive such inattentiveness to our subtle signals as rude, uncaring or perhaps simply stupid. Fortunately for us, dogs bring to the human-dog relationship their wonderful powers of observation, allowing them to be highly aware of our posture, breathing, muscular tensions, and facial expressions, often reacting to changes of which we are not aware. Training or behavior problems often result from the dog’s response to signals we unknowingly have sent. Unfortunately, the dog is often blamed rather than the handler.

Our responsibility as handlers and trainers is to attempt to be as skilled in our observations and non-verbal communications with our dogs as they are in their interactions with us. Our reliance on verbal communication is perhaps one of the biggest stumbling block in the training process. As a rule, any concept that cannot be fully explained in a non-verbal way is a concept that a dog will be unable to grasp.

Learning to become skilled as an observer requires that you practice these skills. As the artist Frederick Franck said in The Art of Seeing, “We often look, but we rarely see.” Information gathered through careful observation is crucial. Without such information, you cannot make any informed decisions on the dog’s behalf.

A sad example is the Sheltie presented to me at an Integrated Approach seminar. The handler’s complaint was that no matter what technique they used, the dog was “lazy” and continued to sit crooked. For over a year, she and her instructor had used increasing amounts of compulsion to force the dog to sit straight. A quick observation showed that the dog moved with his entire body bent slightly to the right, and his tail did not hang straight but over his right hock. Naturally, when he sat, he was unable to sit straight – he couldn’t even walk in a straight line. I found it shocking that not once did the handler or the instructor take the time to really look at the dog – the answer was there all along. The dog was doing his very best, but had a real, physical limitation that prevented him from achieving the goal set for him by his handler.

Take the time to observe your dog carefully and often. Like us, dogs change, have off days, injure themselves and get confused. If you are observant about your dog’s capabilities and limitations, you can make informed decisions. Assumptions about a dog’s understanding or capabilities, unless confirmed by careful observation of the dog himself, can lead to training problems, undermine or destroy your relationship with the dog, and in some cases, are tantamount to cruelty.